I can’t sleep. Again. It’s not horribly late, but it’s been more than two hours since I turned out the lights.  My spouse lies next to me, emitting his typical sleeping song of raspy breathing and light snoring as I wait for the chorus to end.  Finally, I reach over and hold his nose to silence the snores. It works, at least for a little while.

The snoring isn’t what keeps me awake. It’s my own mind and its annoying refusal to heed the night-time speed limit. It races through a disjointed collection of thoughts, memories and concerns. The edits I wish to make to my newly-finished manuscript. Logic issues in the movie I watched earlier in the evening. The training reminder I should send to my colleagues at work tomorrow. The potential topics for my next monthly column. The trials and tribulations of my adult children. The deep revisions required to make my other manuscript workable. And, the regrettable choices I made for lunch and dinner today. My stomach hurts.

In the distance, I hear a single police siren. I can’t tell what direction the sound originates from, but it grows louder as I listen to it. After a minute or two, another police siren joins in with it, followed by the high-pitched cries of an ambulance. And then, the distinctive blaring of a fire truck joins the cacophony. I lie still, hold my breath and listen to the wailing as it grows louder. My heart beats just a bit faster in anticipation that they will turn onto my street, maybe even stop near my house. They don’t. They are somewhere near but not immediate, perhaps up near the bridge or out on the main road. 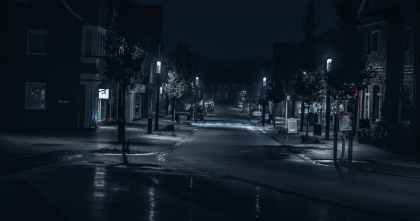 Photo by Simon Robben on Pexels.com

My spouse mumbles in his sleep, rolls overs, and resumes his snoring. He’s not easily stirred.

There is something desperate and desolate about the sound of sirens in the night. They never indicate a joyous event, no matter when they’re heard, but daylight at least confers a sense of hope. Everything is visible and knowable under the sun, and thus perhaps fixable. Maybe even preventable. Emergency sirens in the daytime sound like survival. At night, they sound like futility. They cry out like portents of death and sorrow. Heartbreak and dread. Sirens in the night shriek like they already know they’ve come too late.

All at once, the wailing stops. They’ve arrived at the scene. I wait in silence, my ear trained to the entire world outside my window. Our neighbor’s heat pump cycles on. A car rolls into the cul-de-sac behind us. Missing is the sound of the ambulance as it screams its way to the closest hospital. I’m uncertain if that’s a good thing or a bad thing. I don’t wish to imagine the lives that have changed, the time that has been spoiled and the plans that have been ripped away, but my stomach still hurts and my spouse soldiers on with his sleeping song.

I don’t want to think too much on it all, but I’m wide awake and my imagination is active, and so I will.

← Eulogy for a Laptop
Episode Four of ROYAL Now Available! →

Writers Doing Non-writing Things!
New post for 10 September 2021 on my website: Incentivizing Pesky Writing Goals! Link is in my bio!
I haven’t done a #flashbackfriday in a while, so let’s go back to New Year’s Eve 2006 and our trip to Disney World! My youngest was only 3 ½ so her memories of the trip are a bit spotty, but at 14 and 15, I think (hope) my oldest two have fond memories of our holiday vacation. It was a bit of a difficult time for our family, but I think the trip provided a welcome respite from some of the turmoil.
An author recently made a “fun” Reels video about how white cishet writers are being discriminated against in the publishing industry. Even worse is the ton of supportive comments that video received. It’s depressing to see so many readers and writers continue to believe “reverse discrimination” is a thing. I want to make it very clear where I stand on this, and so, I’m linking to one of my older posts about the critical need for more diversity in children’s books. Give it a read if you have the time—link is in my bio.
Loading Comments...
%d bloggers like this: