Military service is a tough and thankless job that underpays and undervalues. Yet those who volunteer to become soldiers, sailors, airmen and Marines don’t do it for the gratitude. And they certainly don’t do it for the pay. Well, not always. The reasons tens of thousands of our young people sign up for military service every year are as varied and deeply personal as the recruits themselves. Some seek a better life and a better future than what they see in front of them. Some seek adventure. Some follow in the footsteps of family members they admire. Maybe even some volunteer for service on a dare. 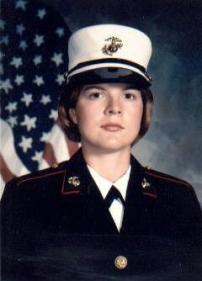 No matter the reasons, most servicemen (though certainly not all) find more than a job that pays. They find a team. They find a new kind of family. They find opportunities. They find self-worth. These are the things I found during my own time serving in the United States Marine Corps. It changed the trajectory of my future and helped land me in a solid and secure place today, and for that, I am forever thankful. And, I am forever proud. In fact, as women Marines make up only 1.14% (approximate as of 2017) of all active duty militay members, I am DAMN proud of my accomplishment!

Yesterday, the Marine Corps celerated its 244th birthday, and today, the nation honors the veterans of all of its military branches–the Army, Navy, Air Force, Marine Corps, and Coast Guard. I don’t like talk about my own military service often–partly due to modesty but also because of privacy and security concerns. But today, I’m bucking that practice to share some photos and memories of my time as a United States Marine.

Here is an old, grainy photo of me and my bunkmate in our barracks on one of the last days of bootcamp. I don’t have photos during the actual boot camp phase, of course, as we were not allowed cameras. (Fun fact: my platoon was the subject of a new recruiting video, so we were followed throughout our three-month ordeal by a camera crew.) This was post-Crucible, when we were finally considered “people” again. 🙂

Turning in our rifles at the armory in the final days of boot camp.

Ah, the day we turned in our M16s. That rifle was the bane of my existence, but you quickly learn to respect its role as the most valuable personal tool during times of conflict. I was not what you’d call skilled and consistently shot Marksman. For those wondering, Marksman is the lowest level you can qualify on the M16 and be allowed to continue your career.  *sigh* I also shot the M249 squad automatic weapon (SAW) and the M2 Ma Deuce during Marine Combat Training, a 3-week post-boot camp training course that all Marines attend. I’m not generally a “gun person,” but I appreciate the experience, confidence, and knowledge I gained on basic weaponry. 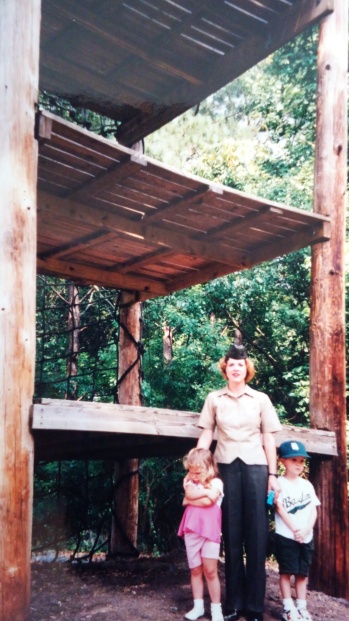 What is the worst part of boot camp, you might ask?  Well, allow me to introduce you to the Confidence Course. Or, as I like to think of it, The Field of Evil. I am afraid of heights, and nearly every obstacle at the Confidence Course is designed so that you climb gravity-defying obstacles of several stories. The Slide for Life was the worst. In fact, when it was my time to get on the rope, I told the dril instructor, “No.” BIG MISTAKE. She dealt with me later for that, but in the end, I did it. In fact, I did it twice. I was so proud of myself for accomplishing that obstacle, that I volunteered to tackle it a second time. Same goes for The Tower, which is pictured in this photo. I was so scared to tackle this obstacle, I nearly cried. But I climbed the damn thing with my squad (you lift and pull each other over the edges of the floor to the one above you for about five floors…) and then did it a second time to give confidence to another recruit who was also scared. Also pictured are my two oldest kiddos, brought to my Marine Corps graduation by their dad. Leaving them for three months to complete this phase of my journey was one of the hardest things I’ve ever done. Yes, even more difficult than that damn Slide for Life.

Running in formation to beat the Army! Circa 1998.

Following boot camp and Marine Combat Training, you are sent to a Military Occupational Specialty (MOS) school to learn the skills for your chosen (or assigned…) job. My field was “electronic warfare” and specifically, foreign language interpretation, which meant I spent nearly sixteen months at the Defense Language Institute in Monterey, California. When not in class, I kept myself busy with volunteer activities, rollerblading along Cannery Row, design and publication of the Detachment year book, and running. Lots of running. I typically preferred solo runs, but I took part for a while in the Marine Corps Detachment female run team for the DLI Intramilitary Run Competitions. I’m third from the front. I still run today, but I’m nowhere near as fast as I was during my “peak” years!

2 comments for “Veterans Day–Yes, I Served!”

I picked this quote by the wonderful “Mister Rogers” to start the new year because it’s going to be important to keep in mind. I’m afraid 2022 isn't going to be a stellar year, at least not in the opening months. 😩
New post on my website for 30 December 2021: Jack of All Fandoms
I'm generally an easy person to buy for. Get me some speculative fiction stuff, and I'm pretty happy. My husband obviously knows this and gifted accordingly.
Sometimes, our lives are better suited to an episode of “Nailed It!” than a carefully-crafted Instagram post. Case in point? This month’s “Writers Doing Non-Writing Things” (or more accurately, “Writers Trying to do Non-Writing Things and Failing Miserably At Them.”)
Loading Comments...
%d bloggers like this: